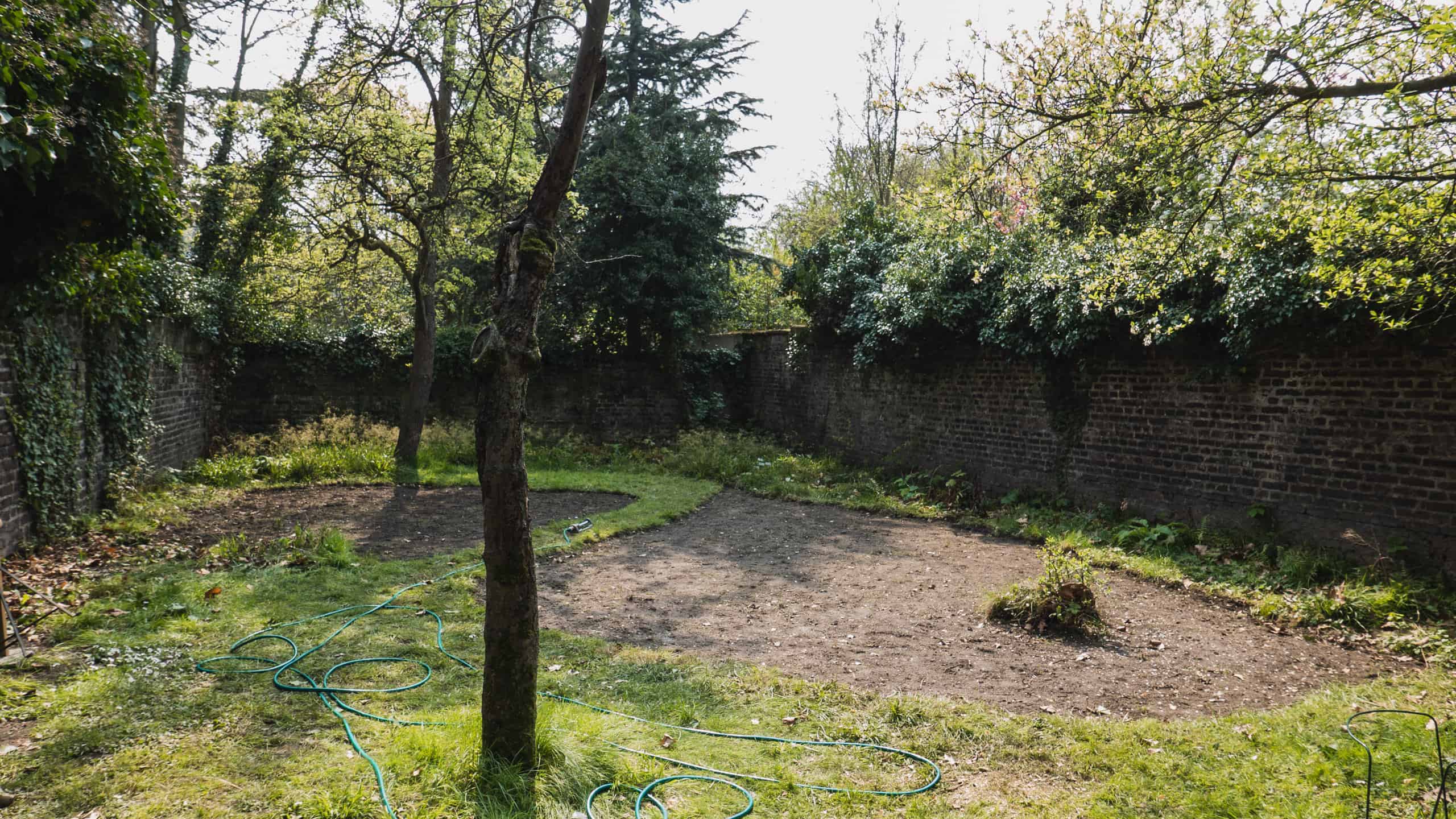 Homepage >> My own garden >> Attempting to create diversity

Having a garden in the middle of the city is lucky, very lucky. But it is also a responsibility. There is so precious little nature left in urban environments that, I think, city gardeners have to protect and strengthen it on their plots.

When I took over my garden it had not been used for 45 years. The previous owner had not been interested. She had bought a flat which, quite randomly, came with a garden. Employing someone to mow the grass had been all she had done.

This garden was a world of its own, perfectly content in its seclusion. I felt like an intruder. Quietly I sat down in a corner. There were seemingly endless variations of bird song, crawling and flying and humming insects and constantly changing patterns of light as sunshine filtered though complex arrangements of leaves.

The garden’s structure was simple: a rectangle, roughly 10 metres wide and 20 metres long, on three sides surrounded by high brick walls, like a room without a ceiling. This garden room was sparsely furnished with plants: ferns and thick bladed grasses at two edges, a thicket of shrubs on another side, and ivy on the walls all around. But most of the garden was grass. A carpet of it covered the entire central area, not so much low-pile lawn, more high-pile meadow.

I decided this grass mono-culture was where I would try to make a difference as a gardener. If I managed to diversify the planting in this area, it would create more beauty for my own enjoyment as well as more diverse habitats for wildlife. That would be the perfect balance of my needs and those of the ecosystem that was my garden. I knew I wanted the planting in the central area to remain low in order to preserve the ‘empty room’ character of the garden. From there it wasn’t far to the idea of making a wildflower meadow.

A wildflower meadow is a romantic icon, a place of longing, the wholesome version of a palm-fringed beach. Everyone can imagine a flower meadow: lush and colourful and alive. Asked to name a ‘happy place’ I suspect a lot of people would answer ‘flower meadow’. But who knows how to make one? I had established and revitalised lawns in different gardens over the years, so how difficult could it be to make a wildflower meadow? Well, very. In the introduction to ‘Meadows’, his authoritative book on the subject, Christopher Lloyd explains: ‘A meadow’s serenity suggests lazy abandon but, like a garden, establishing and maintaining it is almost entirely dependent on human management. Achieving an image of nature as we might dream it to be is not as easy as it looks.’

There are annual and perennial meadows. At first sight both look similar, but there are fundamental differences. Making an annual meadow is straight forward. First year: buy seed mix, broadcast over area of bare soil and wait a few months to enjoy the flowers. Second year, repeat. The result is beautiful with red poppies and blue cornflowers. It is beneficial for wildlife, particularly pollinators. But the glory is short lived. This wasn’t what I was after.

A perennial flower meadow on the other hand is, in principle, permanent. It is a self-sustaining eco system enabled by human management. The most obvious aspect of meadow management is cutting. This mundane act is vital. A meadow that is not cut regularly will revert to the natural vegetation of the area. In temperate climates that tends to be woodland. Ideally a perennial wildflower meadow is a balanced system where no plant species suppresses any of the others, hence maintaining maximum biodiversity. However, this state is very difficult to enable. Christopher Lloyd writes: ‘…meadows need constructive hard thinking’.

The most important prerequisite is poor soil. In nutrient rich settings stronger grasses out-compete the more delicate flowers. Plant-diversity diminishes and after a few years only grasses are left. Most ordinary meadows are too nutrient rich to be easily converted into a flower meadow. One can cut the grass frequently and remove the clippings to gradually reduce fertility and eventually add pre-grown wildflower plugs. But this takes several years and there is no guarantee that it will work. The more radical and quicker approach is to remove all existing grass, take away most of the top soil too and start with seed on bare ground.

I decided on the radical method. I didn’t want to wait, I had already had the garden for over a year and I felt it was time to start gardening. After lots of research I concluded that starting from scratch was the most likely route to success.

So I needed seeds. Intent on providing habitat for local insects, I wanted to ensure I was offering them local plants. A friend who is a conservation biologist recommended ordering seed from a company that looks at customer’s postal codes and supplies regional seed accordingly. Perfect.

I was looking forward to doing some proper, exhausting gardening, intending to take the turf off and sow the meadow in one or two afternoons. I told my Englishman’s mother about my plans. A keen gardener herself she asked if I had the tool for it. First I didn’t quite understand, I had no idea there was a specific tool to lift turf. She fetched a sturdy looking shovel with an angled handle from the shed and offered to lend it to me. Unfortunately that was not an option as it wouldn’t fit in my hand luggage on the flight back to Germany. But I did try to buy the tool in Germany. Describing what I had seen in England only led to confused looks in the gardening department of the DIY store. The friendly member of staff explained that there were companies who had special machines to lift turf. Doing it manually was not something he had heard of. I purchased an additional spade and remained confident.

Perennial meadow sowing is done in autumn or in spring. Mine was going to be sown in autumn 2018. But then there was too much else to do and the weather turned cold and I put it off until spring. April 2019 came and the next window of opportunity was beginning to close. I realised I needed help. Thankfully a friend had offered and my Englishman was coming to visit.

On the 5th of April 2019 the three of us started. First, I laid out a red electricity cable to mark the perimeter of the flower meadow. Ever since I read that Beth Chatto had designed the outline of her flowerbeds with watering hoses I had wanted to try it. The cable worked fine as a hose replacement.

Wildflower meadows should not regularly be walked on. Grazing cattle would be fine because their hoofs make holes for seeds to germinate in. But human footsteps just flatten plants, nothing beneficial about that. So I designed the flower meadow like a flower bed with a path through the middle. It would occupy the middle third of the garden, leaving enough space for walking and seating on either side.

With the red-cabled outline in place we broke ground. Spades cut through grass, with difficulty. How could I have forgotten about the strength of grass roots? The conversation with the nice man at the DIY store kept playing in my head. Luckily my helpers were happily attacking the turf with brute force. We developed a system: The men used the spades like guillotines to chop the turf into small parcels. At a safe distance I was on my knees pulling the parcels out with my gloved hands. Every few minutes I needed help to carry a basket full of heavy clumps of turf to the other side of the garden where we were piling them up. How could I forget that soil is so very heavy?

The crazy idea of removing an estimated 60 square metres of turf by hand could have quickly descended into disaster had it not been for my fellow gardeners. They remained good-humoured throughout, as if they had expected something this strenuous all along. We worked hard, continued the next day and finally the ground was cleared. I was incredibly grateful and quietly ashamed that I had so hugely misjudged the extent of the work.

There was now an alien looking yin-yang shape carved into the remaining grass. It was the exact opposite of the idyllic abundance I had dreamed of. But I was too exhausted to contemplate this too much. I quickly sowed the seeds, only about 2 grams per square metre.  I had read that this was the perfect amount to leave  enough room for delicate flowering plants to establish. Nevertheless it felt like I was sowing too little.

Over the following days I became more and more anxious about my wildflower meadow project. I knew this was the way it was supposed to look at this stage. The problem was that I had only imagined the end result, not the intermediate stages. I was in shock.  My beautiful garden suddenly looked devastated, like paradise had been hit by a bomb.

I had to stop panicking. I had done all my research. I had followed all advice. This was going to be the wildflower meadow of my dreams. I just had to wait.

Did I store the seeds correctly over winter? Did I sow too late? April was unseasonably hot and dry. Should I water? I hesitated for a few days, than asked my friend, the environmental biologist. No, normally I should not water my meadow, but now I had to. Otherwise my precious seeds would simply die in the baking sun. The same day I rushed to install a sprinkler. Hopefully it wasn’t too late. Would this sad-looking patch of bare soil ever become a wildflower meadow? There was nothing to do but wait. 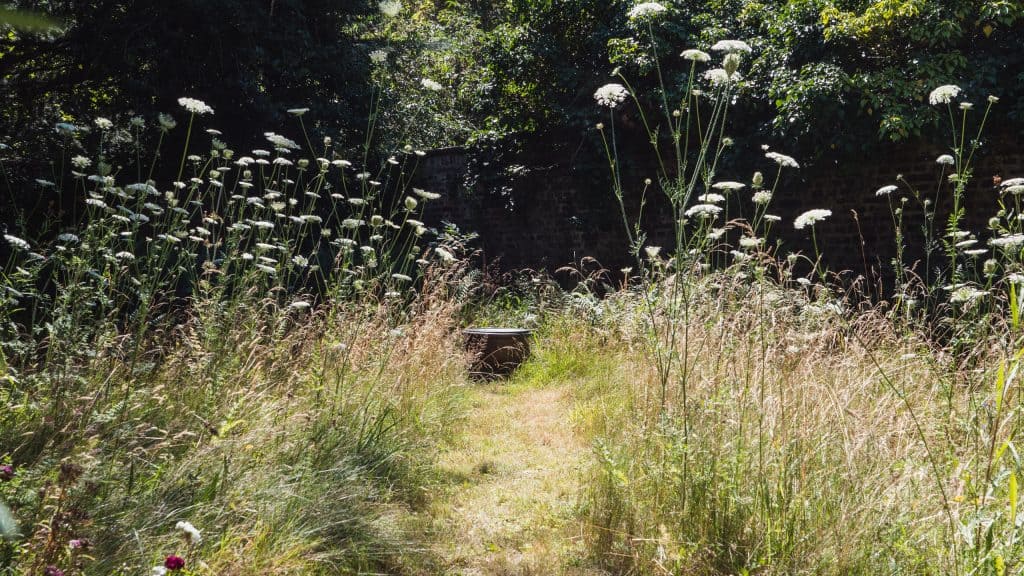 My garden had always felt magical, from the moment I first saw it in the company of the estate agent. But on those warm nights in high summer, with the added intrigue of the unexpectedly tall meadow, my garden seemed otherworldly. 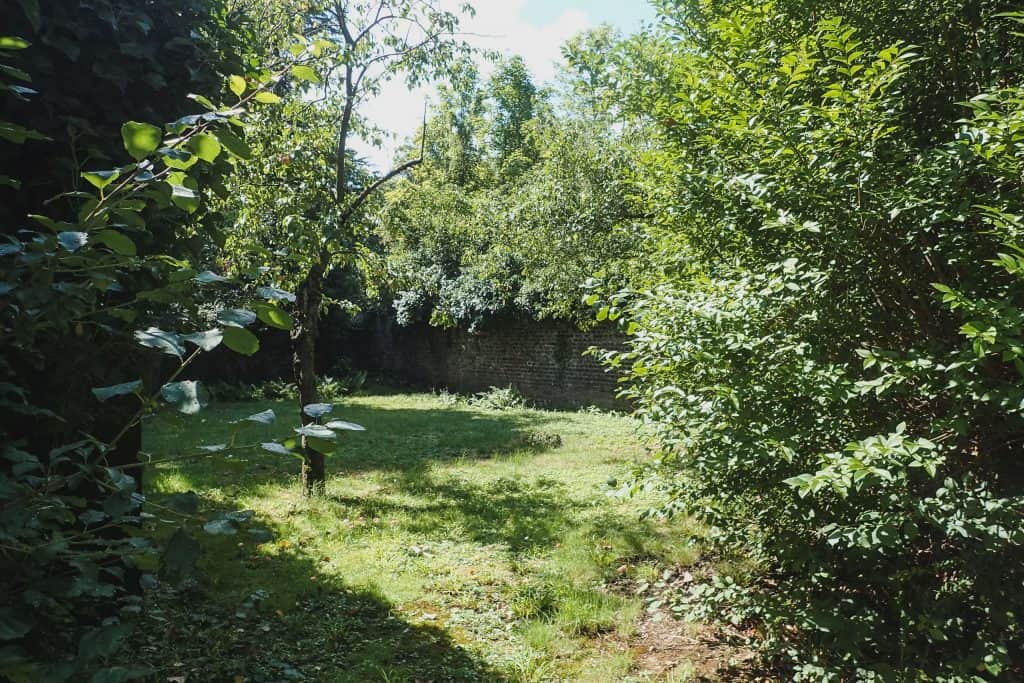 How I found my own garden

In front of me was a meadow, maybe 200 square metres in size, with some ferns at the edges and two fruit trees in the middle. The meadow was surrounded by old brick walls, partly covered with ivy, and beyond them the trees of neighbouring gardens. The sun was shining, the air was full of birdsong, it was a paradise!