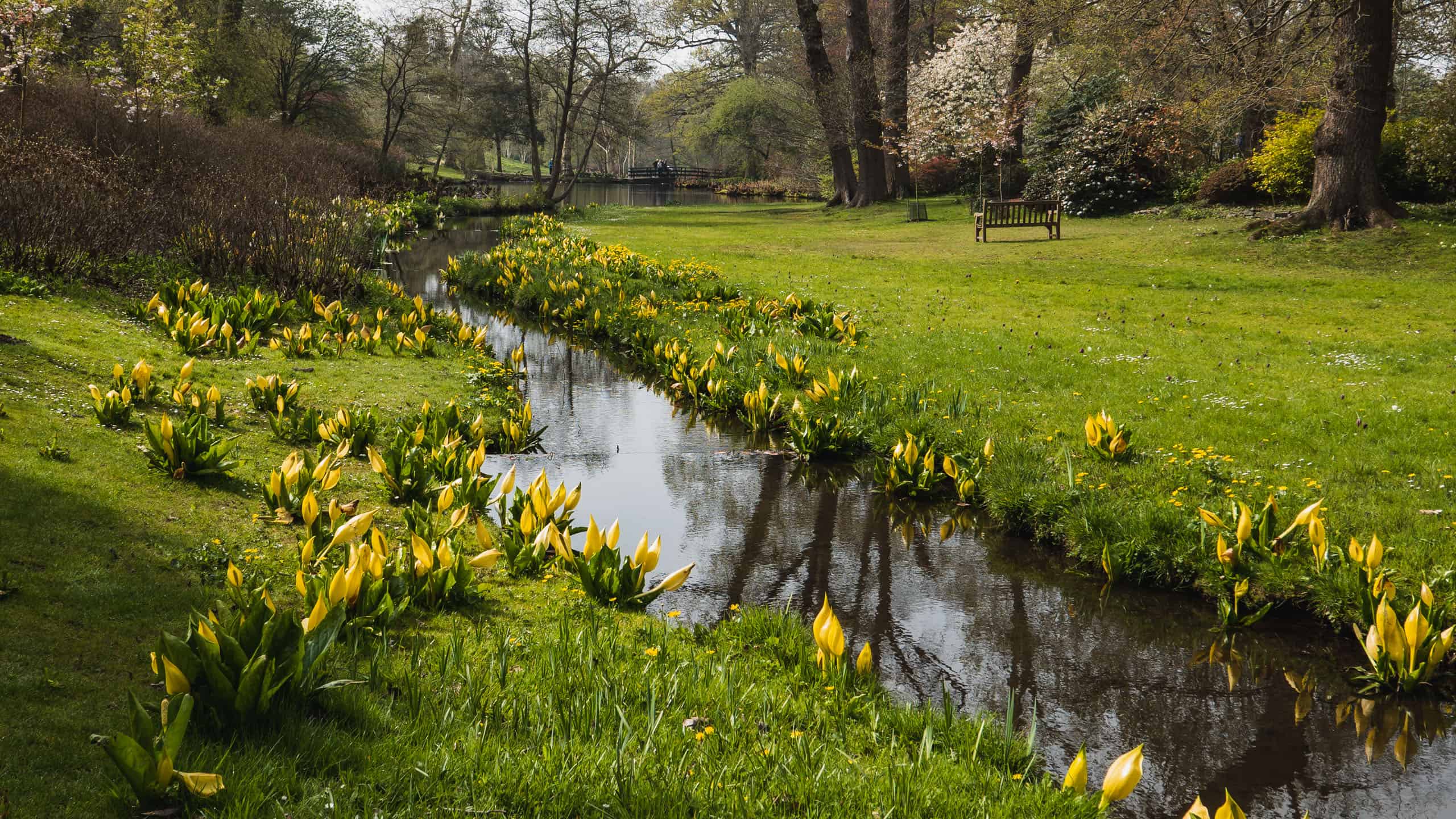 One reason why the Savill Garden appeals to me might be that it is what I thought a garden ought to be when I was growing up in Germany in the 1970s and 80s. Today I know this garden style represents just one school of thought. But I still enjoy it, particularly when executed so well.

From the terrace of the entrance building I look across a wide valley. A brook flows through the middle, damned into two ponds. The gentle slopes are covered in neatly trimmed grass. At the edge of the water yellow flowers glow in the sunshine; they are colonies of skunk cabbage (Lysichiton americanus). Native to the North American wetlands, they have found a perfect habitat here. I love the tropical appearance of these large, waxy flowers shaped like calla lilies. Usually my delight in finding Lysichiton americanus somewhere comes with a feeling of guilt. In the UK and the EU the plant is considered invasive due to its excessive spread along waterways. Here at the Savill Garden I get to enjoy it with a clear conscience. The garden is so very well-maintained that there is no danger of the plant spreading outside.

On the far side of the valley are the Hidden Gardens. Underneath mature trees, paths covered in soft carpets of freshly-mown grass meander between beds of spring flowers. Some beds are tightly-packed with fine-petalled dog’s tooth violets (Erythronium) while others still show a lot of bare soil. Here and there fresh green is only beginning to emerge. Every leaf still looks perfect, no slug or bird has discovered them yet. My favourite leaves are the plissé textured ones of Veratrum album and the thin swords of Iris sibirica. Beautiful leaves aren’t only near the ground. Delicate japanese maples form semi-transparent parasols. We find an oval-shaped bed with bright purple pompoms of drumstick primulas (Primula denticulata), trilliums with their characteristic three leaves and white (Trillium grandiflorum) or maroon flowers (Trillium cuneatum) next to several other rare plants we don’t know the names of. This is a perfect spring garden, all neatly wrapped in green ribbons of lawn.

By chance we get into conversation with one of the gardeners about the beauty of the fresh green in this part of the garden. To our surprise she talks about a problem. Water is what enables this lush foliage, but too much causes damage and there is too much here. The lawn paths are particularly vulnerable. Apparently there used to be narrow trenches all over the valley to drain some of the excess moisture. Over the decades a number of them were filled in for aesthetic reasons, hence today’s problem and a project to add new drainage. Ironically almost everywhere else in the garden the soil is so dry that it needs irrigation. We come away from this conversation feeling we were given a peek behind the scenes. Knowing about the difficulties makes us appreciate the perfection around us even more.

Before we get to other parts of the garden, it’s time for lunch. So, up the slope to the visitor centre. The building is impressive. The roof is an exquisitely-crafted wooden wave. From inside the construction looks like the underside of a lily leaf, a giant one. The building is vast in every dimension. Sideways it seems to stretch almost to infinity. A restaurant, a cafe and a gift shop are spread across the open plan space. One could be forgiven for confusing this setup with a modern motorway service station, especially after eating at the restaurant. But the food is the only weak point. Everything else radiates upmarket attention to detail, well-designed, well-maintained, made from the best materials (the toilet cubicles are solid oak). So a motorway station, maybe, but a royal one.

This isn’t a coincidence as the Savill Garden is part of Windsor Great Park. This vast parkland west of London used to be the monarch’s private hunting ground. Nowadays the Queen is still the owner of the Crown Estate, but it is controlled by parliament and all proceeds go directly to the Treasury. Still, the garden does not seem to struggle for funding. In fact its expensive, labour-intensive perfectionism shapes its style of gardening.

Setting off again after lunch at the cafe (the food tends to be a bit better there than in the restaurant) we turn right, off the main path. Here the overall impression is one of muted colours, silver-greens to pale sand. Plants are architectural in form, leaves are rugged or prickly and unusually shaped. The thin branches of Muehlenbeckia astonii, for example, seem to be the 3-dimensional visualisation of a mathematical formula. Cordylines look like spiky, simplified versions of palm trees. This is the New Zealand Garden. The Queen received the first plants for this garden as a gift from the New Zealand government during a state visit in 1986. Ever since the Savill Garden has continued collecting hardy New Zealand plants. I like this garden because it feels like another world. Every plant looks just a little bit unfamiliar. In fact 80% of the flora of New Zealand is unique to the islands.

My Englishman prefers a collection of plants from Mediterranean-type climates on a south-facing slope on the other side of the valley. This is known as the Dry Garden. It was made in 1978, just after Beth Chatto had published her influential book on the subject. Like the New Zealand Garden it is dominated by pale foliage. But here it is mixed with the acid-green of fresh euphorbia-growth and the occasional clump of tiny red tulip flowers. The Dry Garden is beautiful in the spring sunshine, even though it will be more spectacular later in the year.

That is even more true for the adjacent herbaceous borders, the roses and other areas of the garden where the plants will be at their best in summer. But it’s a good time to appreciate the structure of the garden: hedges, lawns, all clipped with utter precision. Soon they will only be backdrops. Skilfully made support structures for tall herbaceous plants will be hidden completely. Now they stand like wispy sculptures.

As we walk around the out-of-season parts of the garden we come across a few plants that are very much in season. My Englishman is particularly taken with the delicate red leaves of a Japanese acer (Acer palmatum). I am amazed to find an Australian acacia (Acacia pravissima) in full bloom at the wall of the rose garden. It is glowing in the sun like a golden firework. The flowers are similar to those of the Mimosa (Acacia dealbata), my favourite tree, but the leaves are completely different. What an interesting discovery.

In England gardens are often artfully disheveled. The Savill Garden is not. There is not a weed in sight. I cannot think of another garden which is kept to such perfection. Everything is incredibly well-maintained. Luckily, this careful control is paired with flawless design and outstanding plant collections, otherwise the garden would run the risk of appearing sterile.

One reason why the Savill Garden appeals to me might be that it is what I thought a garden ought to be when I was growing up in Germany in the 1970s and 80s. Today I know this garden style represents just one school of thought. But I still enjoy it, particularly when executed so well.

My Englishman was the one who first introduced me to the Savill Garden. I immediately understood why he likes to come here. It is a wonderfully relaxing place. The garden is so well laid out that, even in the presence of several coach loads of fellow visitors, it still feels pleasantly spacious.

Normally, we visit the Savill Garden twice a year, at least. In August the grand herbaceous borders are at their best. I wonder if we will see them this year.

For opening times and other information please check: windsorgreatpark.co.uk 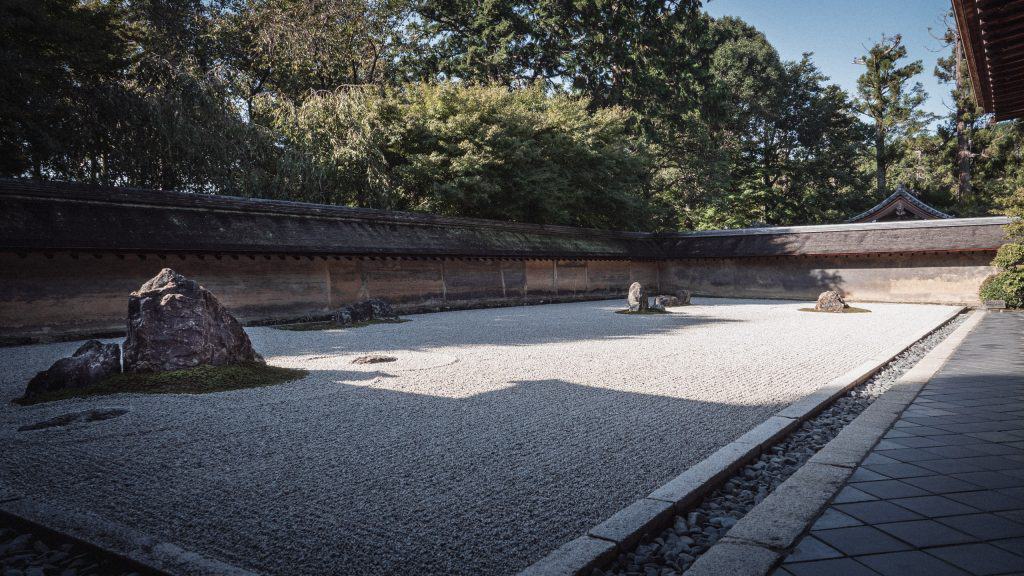 It is very quiet. Nothing moves. The precision of this highly fragile arrangement is breathtaking. It is the expression of a simple idea full of infinite variation. This is the most famous Zen garden in the world – Ryoan-ji. 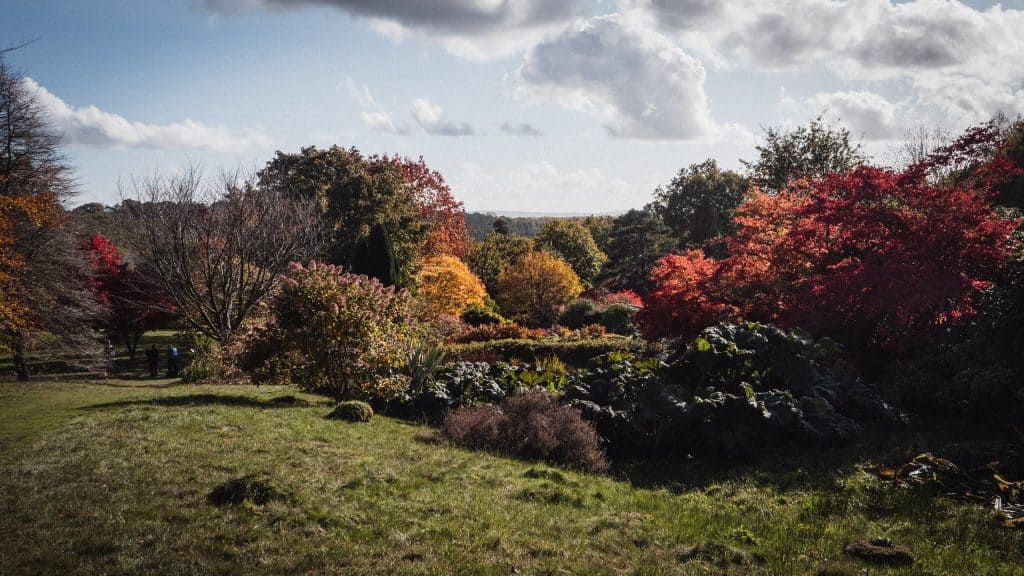 There are no prescribed routes to follow, no obviously engineered views. The remarkably sparse planting opens a multitude of angles. Walking through the garden presents ever changing compositions of shapes, textures, colours. Every visitor is invited to find their own perspective.