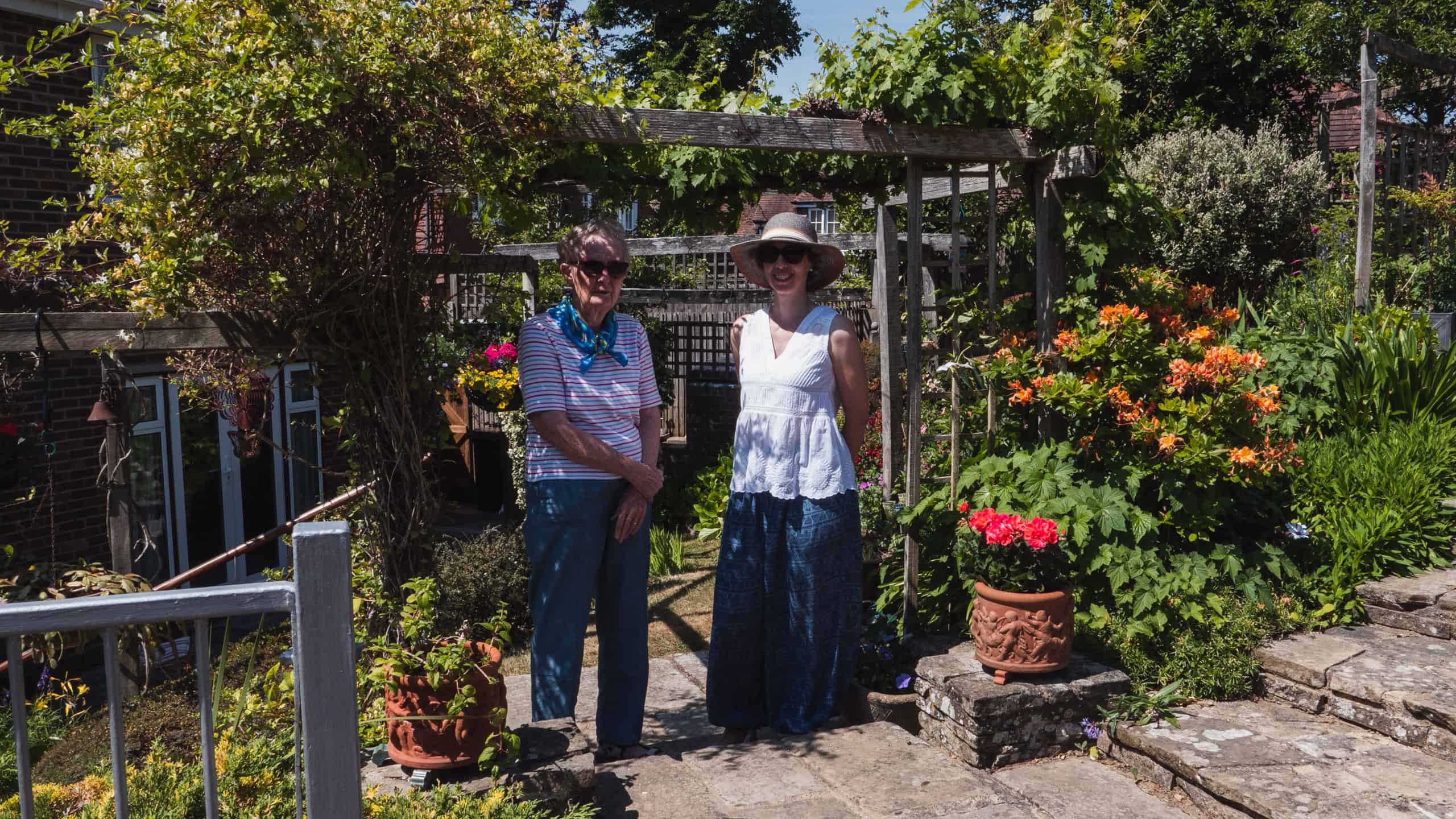 My whole field of vision is full of plants, this is a garden in Cinemascope.

“Our garden is looking a bit ‘gone over’ at the moment so don’t expect really great things” texts Joanna. She and her mother Pam are looking forward to my visit but are worried I’ll be disappointed by their garden. I try to protest, to explain that I’m interested in their relationship with their garden and don’t mind if there aren’t that many flowers out at the moment, but that almost sounds like an insult, so I shut up.

The narrow country road turns into a green tunnel. Sun rays sparkle between leaves. Now and then I get a glimpse of gentle hills and picturesque villages. Here, in the High Weald in Kent, England is particularly idyllic.

Pam and Joanna are already waiting in front of the house. For all of us this is the first social encounter in months, ever since the coronavirus lockdown began. So the welcome is very friendly but a bit awkward at first, as we are very careful to keep the required 2 metre distance. Finally, Joanna goes ahead, along the side of the house and into the garden.

As I get a first look around the corner, I am stunned. Like a wide amphitheatre, a rock garden curves around a patio at the back of the house. A steep slope has been shaped into two massive terraces, their sides held by well placed boulders.

An overwhelming variety of plants grow from the crevices. Between heather and cotoneaster there is a profusion of colours and textures: fuchsias and begonias and pinks and hardy geraniums and lilies and azaleas and many, many others – I don’t know where to look first. And there is more. A wooden pergola rises high above the rock garden providing an additional level for the presentation of even more plants. Honeysuckle, clematis and others clamber up posts and flower baskets hang from cross beams. This is a plant show of dramatic proportions.

An azalea (a miniature Japanese azalea, as Pam points out) on the side of the lower terrace is completely covered in orange/pink blooms. However, other azaleas higher up have already stopped flowering and the same is true for more plants around the garden. This is what Joanna meant by ‘gone over’ and I agree it’s a shame I’m not here at its peak. Still, I think the garden’s superb structure combined with the different leaf textures is spectacular – even with fewer flowers.

It is a hot day, more like the middle of August than the beginning of June. Pam has placed tea and biscuits on the table on the patio. I’m very happy to sit in the shade for a bit. And this is the perfect spot to enjoy the rock garden. With my back to the solid wall of the house I feel pleasantly protected to enjoy what is front of me. My whole field of vision is full of plants, this is a garden in Cinemascope.

The rockery is old but perfectly maintained. When Pam and her husband John bought the house in the late sixties, it had just been built into a steep, south-facing hillside. Levelling the ground for the building had left a particularly steep slope directly behind the house. When Pam was pregnant with Joanna, she was unable to climb to the higher part of the garden to hang up the laundry. So a staircase was cut into the slope for her, the first piece of landscaping.

Then Joanna was born. When Pam came home with her, after two weeks in hospital, the garden was completely transformed. Under the John’s direction, the hill had been shaped into beautiful, wide terraces. When Pam tells me the story, it’s apparent how touched she must have been back then. What Pam leaves out is that it was she who so masterfully filled the rock garden with plants and tended to them for decades.

I drink my tea and while I am still absorbing the rock garden as a whole, Joanna draws my attention to details. “The flower baskets are the result of the lockdown,” she says. In other years she found no time to plant them up. But in these last weeks and months she has spent a lot of time outside. The garden is hard work, and Joanna has taken over most of it. Pam is very fit, but the rock garden has become too much for her. “Gardening on the slopes is like mountaineering,” says Joanna.

Pam is still an enthusiastic gardener. Along the side of the house she grows vegetables and of course she still has great influence on the whole garden, knows every plant in great detail. She shows me heathers that are as old as the garden. Her care and skilful pruning have kept them looking great. There are some dying strap-shaped leaves in one of the beds. Pam explains this is not a sign of sloppy gardening, but the resting period of a Jersey Lilly (Amaryllis belladonna). She makes a point of adding that the plant is named after the Edwardian actress Lillie Langtree. I thought it was Nerine bowdenii, but that’s wrong. However their growth patterns are similar. These plants produce leaves in early spring and while the flowers emerge in November, without leaves.

Did I know that there was a swimming pool? Again, it was John who had it built. At the time, he had worked for a company specialising in the construction of such pools. To the right of the rockery, one of considerable size had been dug into the hillside. While Pam points to the substantial  retaining wall, I try to imagine the elaborate construction work it must have required. The pool hasn’t been used for years and is now covered with decking, but it must have been incredibly glamorous – and a lot of fun for Joanna and her sister Briony.

“The whole garden designed itself”, says Pam and walks up the stairs that were built for her all those years ago. At the top I understand what she means. This difficult terrain needed the structure of the rockery to become a garden.

Here above the rock garden we are on the edge of a lawn. Coming from the enclosure of the rockery, the garden suddenly feels spacious and wide open, but not unpleasantly so. Trees and bushes ensure this part of the garden is just as private as the rock garden. It is hard to believe that within less than 100 metres is the centre of the village.

Pam returns to the house while Joanna and I head further up the slope, across the lawn and up another flight of stairs to the highest terrace of the plot. An old brick wall forms the boundary and in front of it, in the outermost corner, there is a bench under an arbour. Clematis and a rose tumble over it and in front small blossoms of pinks and thrifts mingle. A stone sculpture completes the romantic scene. The cat has followed us and lies down on the bench as if to demonstrate just how relaxing the place is.

This part of the garden is Joanna’s domain. Many years ago it all began with a tiny conifer (Thuja) seedling which has since grown into a tree. But Joanna’s true love are grasses. Little by little, she has planted more and more of them. Now grasses dominate the borders in this part of the garden. They go well with tall white alliums. Her newest acquisition is Mexican feather grass (Stipa tenuissima). She has planted the delicate blades next to the profusion of dainty pink flowers in front of the bench.

This is where Joanna experiments, develops her own way of gardening. Her approach is gentle. She leaves each plant its freedom and observes before interfering. At the beginning of the year she decided to stop mowing part of the lawn. Now she enjoys the delicate flowers of the different grasses. Maybe she will extend the experiment next year.

As we walk on I notice a roughly hewn granite standing upright in the grass. It fits well into this part of the garden. Then I notice a small plaque, ‘Briony’, it is a memorial to Joanna’s sister, who passed away far too early.

Pam and Joanna’s garden is full of family history. In between John’s hard landscaping the two of them plant and tend together. I sense that at times there is debate about how to do things, but that’s good, it keeps the garden alive. This garden is a successful combination of their different styles and above all it is a demonstration of Pam and Joanna’s shared love of plants. 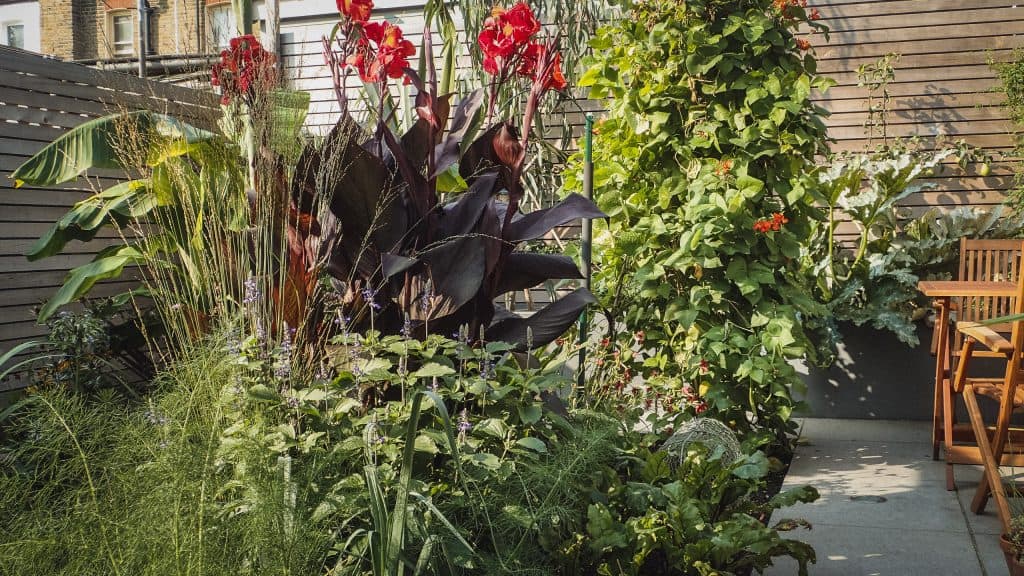 My Englishman’s garden, and mine [part 2] – An attempt to mix edibles and ornamentals 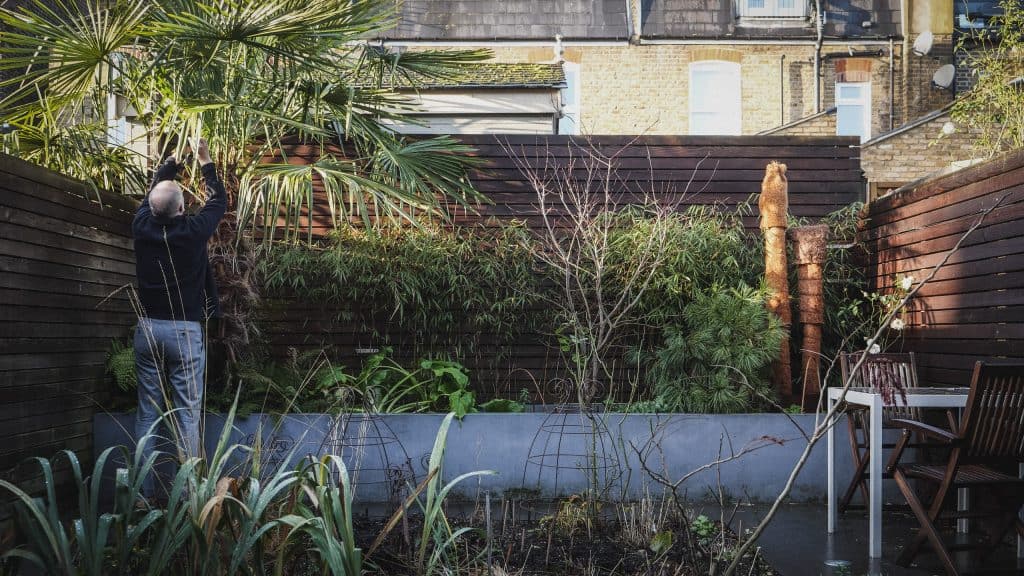 My Englishman’s garden, and mine [part 1]